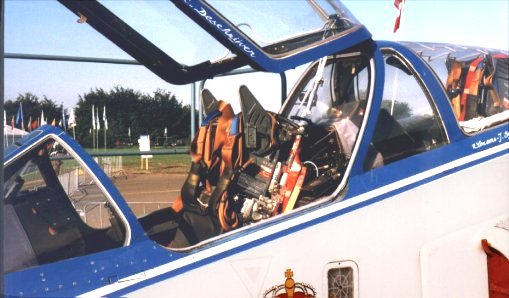 These photos of a Mk. B-10N seat come from Mark Verbeek. The photo above is one he took at an airshow. The seat identification is tenative, but believed to be accurate. The seat is equipped with a large pair of canopy breakers on the headrest. It also uses the European style parachute harness which is integral with the seat as opposed to the USN/USAF separate torso harness style. This seat was photographed at an open house, and the seat is unsual in its appearance. The odd paintwork and lack of certain markings made Mark suspicious that the seat may be a training seat.

The Mk. 10 series of seats is used in several aircraft including the RAF Tornado, and the USN F/A-18. As with all Martin-Baker Aircraft seat families, there are many differences in the seats. These pictures should be contrasted with the Tornado IDS seat photos that Mark provided as well.