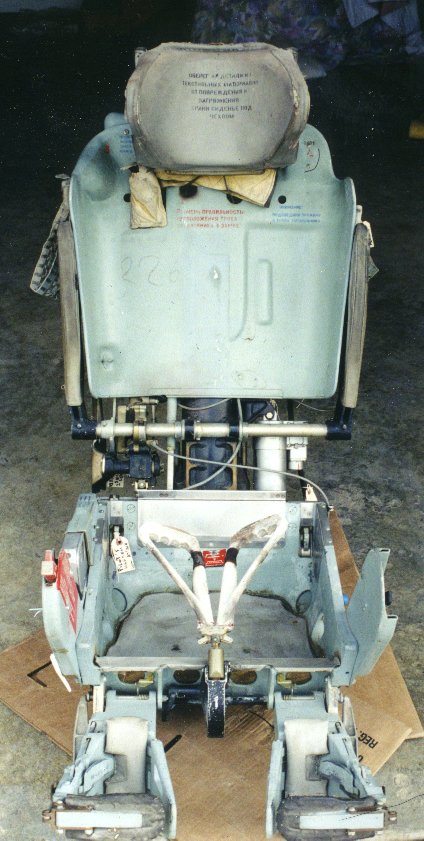 This seat is one of the latest acquisitions of Jean Potvin. It is an early KM-1 used in the MiG-21. The seat was exposed to the weather for some time and it shows unfortunately, but Jean will have something to do making it look better. He has spent some time examining it and has identified many of the mechanisms of the seat, and provided me with the following information:

To recap my research: Relative to western seats of that era, the most interesting features of this Russian-design are:

On the left knee guard is a black inertia reel handle. On the other leg guard is a red handle for ground egress or manual override situations. In the front view you can see the lower harness connections. The main ejection handles have been sun-faded from red to a off-white color. (The seat was in outdoor storage for some time prior to Jean acquiring it.) The foot restraints are shown in the closed position in all photographs, while the arm restraints are shown retracted in the front and 3/4 right view and in the deployed state in the other photos.

The lower right side of the seat mounts two mechanical actuators for various functions of the seat sequencing. The upper one is a PPK-1P which is armed by a cable from the first drogue chute which is attached to the red loop of the starter key. This is the primary seat separation initiator. The lower PPK-2P is actuated by seat motion withdrawing its starter key (the blue loop). This provides a failsafe function by having it perform the seat separation actions after 3.5 seconds if below 10,000ft. The cables from both PPK units can be seen leading back to the aft end of the seat pan.

The back view shows many points of interest. Starting at the top center and moving clockwise, the top of the black catapult tube is missing some parts. To the right of the shoulder of the catapult tube is a green box which is the inertia reel/shoulder harness control. Four cables can be seen entering the top of this unit. They connect to the roller units visible outboard of the springs on the top of the seat. (Those springs are used to flip up the headrest/drogue container to release the second stabilization chute.) The two green tubes running vertically along the right edge of the rear are the arm restraint extender (thin, light green), and retractor (thicker, darker green) units. The arm restraints are extended at seat initiation, and retracted as part of the seat man separation. Outboard of these at shoulder height is the pyromechanism for the canopy release. It also has an interlock to prevent firing the catapult of the seat until the canopy has separated and withdrawn the interlock.

The lower right of the seat contains mechanisms which are used to release the harness at seat separation on command from the PPK mechanism cables. To the left of the base of the catapult/rocket tube is a silver cylinder which is an electrical motor to drive the seat pan up and down for height adjustment. Above it on the outboard left side is a large silver box, which is the KPA-4 Speed/Time computer. Acutated by a key being pulled by a cable in the first inch of seat travel, it determines the 'mode' of the seat based on the sensed airspeed. We believe the airspeed is sensed via the black hose running out of the base of the unit. Next to the KPA-4 is a cylindrical structure with a right-angle turn at the top. This is the rocket initiator unit. Above it, horizontally mounted behind the catapult is the initiator for seat man separation. It is fired by a cable from the KPA-4 running up and over the pulley near the top of the seat. The cable is protected by a clear plastic shield running up from the outboard edge of the initiator.

Thanks to Jean for allowing me to use these photos, and for the research he has put in on the seat.

Additional information on the KM-1 seat can be gathered from Thomas Kraft's web page on the MiG-21.